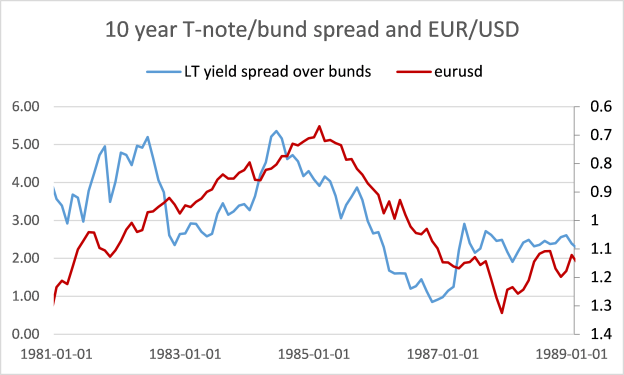 Both have been involved in the entertainment industry and both are tax cutting Republicans. Beyond that many Reagan fans would see comparisons with Trump as an insult. But can Trump have a similar influence on the economy and the USD? Reagan’s presidency saw the USD embark on a huge roller coaster rise almost doubling in value against the DEM in 4 years before falling back to its starting level by the end of his presidency. Can the same happen under Trump?

Reagan’s presidency was notable for its big tax cuts, strong growth and roller coaster move in the USD. Trump is also looking at a big tax cut and a big increase in infrastructure spending and they have the potential to mimic the impact of the Reagan years in broad brush terms. While there may be criticism of the efficiency and sustainability of his tax proposals, the markets will initially react more to the brute power of any fiscal expansion. All such efforts have a price and often end with a bad hangover, but by dint of its status as the global reserve currency and the global superpower the US is able to take fiscal actions that might be seen as reckless elsewhere without a major short-term risk.

How big an impact on the economy Trump will have will depend on how much of his proposals he can get through Congress. With a Republican House and Senate he is in a better position than Reagan was, who faced a Democrat House for his whole term, but nevertheless was able to push through some radical tax cuts. I am not going to go into too much economic detail about Trump’s proposed tax cuts and infrastructure spending, in part because his proposals are bound to change, in part because what he gets through may look more like the House Republican package than his current proposals. But it is worth noting that his election proposals involve around $7trn of tax cuts over 10 years and at least $550bn of infrastructure spending. His tax plans will likely be bargained down but even the House plan will involve a corporate tax cut to 20% and personal tax cuts. Some think that the economic impact will be modest, in part because a widening US budget deficit will push up yields and hold back private sector spending.This is possible, though in my view it will take quite a large move up in yields to have this effect, and with yields very low elsewhere rising US yields will make treasuries too attractive internationally for yields to rise too far.The infrastructure spending in any case looks to be the main agenda item for the first 100 days, and this will have a substantial direct growth impact. Tax plans will probably take longer to pass, but should also have a significant impact.

But even if the impact on growth is quite modest because of the impact on yields, the rise in yields will itself be supportive for the USD. We have already seen the start of this. It is here that the comparison with the Reagan presidency looks most apt. Not only are US yields likely to rise in response to more expansive US fiscal policy, the Fed were in any case set to embark on a steady rise in short-term rates. Meanwhile, yields elsewhere have much less potential to rise, with the BoJ locking 10 year yields to zero and the ECB debating an extension of QE rather than tightening. The Euro also looks likely to struggle under the same surge of ant-establishment political uncertainty that has helped to elect Trump, with elections in France and Germany next year and a significant referendum in Italy approaching. While these could also lead to more expansionary fiscal policies in Europe, eventually reducing EUR weakness, in the medium term the political uncertainty looks more likely to weigh on the EUR.

As a reminder of the impact of the Reagan presidency on the USD, the chart above shows the US 10 year yield spread over bunds and EUR/USD (based on USD/DEM). EUR/USD nearly halved from 1.23 in January 1981 to 0.67 in February 1985 when the Plaza accord was initiated to halt the rise of the USD.

There are a lot of questions about timing with Trump policies and the USD. Reagan didn’t really get many of his policies implemented until late 1982 after being inaugurated in January 1981, and the chart suggests this was the second leg up in yields after the first had been triggered by the policies of Volcker at the Fed. However, the USD started to rise almost from the moment Reagan was elected. Of course, some of this was down to Volcker rather than Reagan, who had come in under Carter and had raised rates sharply to bring down inflation. But anticipation of Reagan’s policies played its part. In the case of Trump, he may well get things through faster than Reagan, and with the Fed already primed to hike the USD seems likely to react immediately. It has already started.

In addition to the potential impact of fiscal policy on growth and yields, the Trump presidency offers the possibility of new Fed appointees favourable to his more hawkish preferences for monetary policy, and the intended corporate tax cuts could also lead to huge repatriation of funds held abroad by US corporations, both of which could exacerbate the USD boost.

Of course, there are aspects of the Trump presidency that may not be seen as being so USD positive. Severe restrictions on immigration could be expected to have a negative impact on growth, as would major changes in trade agreements. But it remains to be seen whether these “populist” policies will be implemented aggressively. While in theory the President can make changes to trade agreements much more easily than he can to spending decisions, Trump’s election promises may turn out to be negotiating positions. His post-election statements suggests some backtracking, but even if they don’t restriction of labour supply and restriction of imports could result in significant inflation and higher yields, possibly even boosting the USD further.

Of course, none of this represents an opinion as to whether Trump’s policies are good for the US or the world. The strength of the USD is not a barometer of good or bad policy. It’s a price, and right now it looks like it’s going up.